On the Occasion of Curtis Brown Ltd’s 100th Anniversary

Thank you all for joining us tonight in celebrating our 100th anniversary. To start, I’d like to mention that, coincidentally, this year happens to be Maureen Walters’ 50th anniversary at Curtis Brown. So thank you, Maureen! Actually, that’s not even our record. Emilie Jacobson, who unfortunately passed away in 2010, held that. She worked at Curtis Brown for an incredible 64 years. And I’d also like to thank our Centennial Committee for all their hard work in planning this celebration.

We’ve had the good fortune to represent a wonderful list of authors and illustrators over these many years and we wouldn’t have made it this far, or this successfully, without all of you (and, well, your predecessors).

As one of our clients, W.H. Auden, once said: “A real book is not one that we read, but one that reads us.”

Curtis Brown’s history is closely linked to the history of our culture and society over the past century.

From THE FEMININE MYSTIQUE, which sparked the beginning of second-wave feminism, and ATLAS SHRUGGED, which solidified Ayn Rand’s philosophy of objectivism, books as controversial and influential today as when they were first published, to the little bunny that won’t go to bed in GOODNIGHT MOON and the bull that won’t fight in FERDINAND THE BULL, wonderful tales that echo in children’s heads around the world as they fall asleep at night.

From the works of John Knowles, Robert Cormier, Paul Zindel, and S.E. Hinton, authors who revolutionized the children’s book market, to GOOD TO GREAT, which is required reading for MBAs and boardrooms around the world in thirty-seven languages and with more than 20 million copies sold. 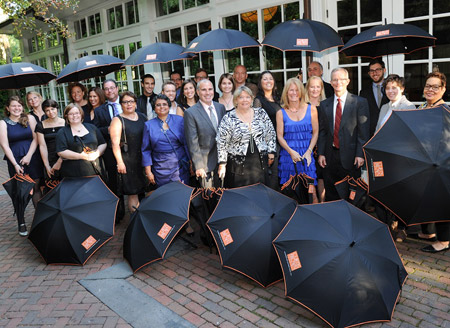 From Alvin Toffler to Po Bronson, from Louis Auchincloss to Emily St. John Mandel, from Diana Palmer to Wendy Corsi Staub, from Thomas Merton to Karen Armstrong, from Tony Hillerman to Jeff Abbott, from Ogden Nash to XJ Kennedy, from Jane Yolen to Linda Sue Park, from Jean Craighead George to Gordon Korman, from Ursula le Guin to Joe Abercrombie to Diana Gabaldon, and many, many more, our clients create amazing, powerful works of art that capture human nature with just the right words that penetrate our minds and enrich our imaginations.

We look forward to the future and to continuing the partnership we share with you in making the connections between our authors and their readers with books that are thoughtful, passionate, funny, poignant, whimsical, provocative, enduring, and, as Auden said, real.

Thank you, and please enjoy the rest of the party!

• Canon of Ethics of the Association of Authors’ Representatives, Inc

• On the occasion of Curtis Brown, Ltd.’s 100th anniversary

• On the Occasion of Curtis Brown, Ltd.’s 70th anniversary